Another newbie event I figured worth a try, especially considering it was held at Cousin's Paintball Park in upstate NY, where a number of other mud/obstacle races (Survival Race, Rebel Race, MudmanX) are being held in 2012.  Like many other infant events, the scale and organization were subpar compared to the more established ones. When the first wave was let off by a random-looking guy counting down from ten with his cell phone and then an airhorn that didn't work, I knew we were just not off to a roaring start. The small, local feel of a small race can be a nice change of pace, but the several hundred racers who showed up might not be enough to let OA return for another season.

1. COURSE- Making decent use of the limited park space and incorporating the woods, water, as well as paintball forts/structures/etc, the course was laid out fairly well.  But for established racers, it was just too easy. Without much to speak of in terms of running inclines, any true deep mud pits, or real challenging obstacles, I just didn't leave satisfied with what was offered.  I will say I liked the inclusion of a paintball target practice as one obstacle, and the bunch of random "pick your path" choices along the course were a unique feature to mix things up.  Plenty of water, but Mudman likes more than his sneakers dirty at the finish line!  GRADE = C

2. FESTIVAL- Perhaps the most interesting afterparty at an obstacle race that I've seen thus far... it was just too funny to hate the polka band that played under the tent, while bratwurst and other grilled food was for sale as part of "Oktoberfest" (in June? why??).  It had a bit of a circus feel to the festival, which might just go along with the event as a whole.  Nice people, though- staff and volunteers- friendly and glad to help.  Still, more of a picnic/bbq than a real party.  GRADE = D

3. SWAG- Pleasantly surprised that the finisher medal and tshirt were pretty decent.  Both sporting the well-designed logo and even the year on them, the swag might have been the best part of this race.  And might also be collector's items if it's the last we see of OA?  GRADE = B 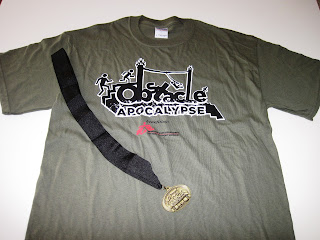