Disclaimer: Mudman and MudmanX are not brothers, or not even distant cousins, but they do share the same passion for mud, obstacles, and racing- which automatically makes them friends ;)

Besides the obvious reason, I was drawn to this event on hearing the rather unique idea behind MMX was to both incorporate the elements of nature and present a challenge to phobias.  Sort of a different take on this type of race, though at the same time there were also a number of "borrowed" pieces of similar events (not that it was a bad thing though).  Set up over 5 miles on Cousin's Paintball Park, where a few other races will visit in 2012, feedback seemed like this was the best of that group so far, even despite a few unexpected setbacks during the day.

1. COURSE-  A primarily flat area, with only small hills or minor descents where spots were excavated, meant the race likely would be fast and hopefully rely on creative "use" of the land and obstacles.  Being a paintball course with scattered props, this was probably the first race where I have ever climbed over a boat in the middle of a forest!  My favorite obstacle was likely the "Epicenter", which was a pitch black and smoky hut where you had to work through a maze and find the ramp to exit.  The course was mainly built by the same folks who put together Tough Mudder, and most certainly everyone recognized the copy of the live "electroshock" wires obstacle (still remains popular even after MMX apparently juiced up the voltage a little higher!). Where they could have improved would most importantly be the spots that were poorly marked for direction, or the very few staff on course to help, as many people lost their way close to the finish line.  Also, the grand finale slippery wall, which I heard was intended to be the longest and steepest of its kind, proved too much of a challenge for many when it was also greased up and before more knots were added to the only two ropes to climb. Both were addressed and modified as the race went on.  GRADE = B

2. FESTIVAL-  Hard to assess fairly due to the major thunderstorm which came through midday, interrupting the live bands and carnival type games going on.  Hot food was offered for sale, including the giant grilled turkey legs, an item borrowed off Warrior Dash's menu. Definitely a cool atmosphere anyway even during the torrential downpour, as lots of mudders had no issue with getting more wet and dirty.  Would like to see how this would have gone if Mother Nature didn't interfere and many didn't run for their cars.  GRADE = C

3. SWAG-  Really nice original gray color tshirt (which of course says what on it?!) and coordinating yellow headband, a la Tough Mudder again, are there for you at the finish line.  You also get one free beer with additional for purchase at $4.  Top 3 men and women earned cold hard cash and yes, yours truly did represent the Mudman name well, taking 2nd place overall ;)  GRADE = B 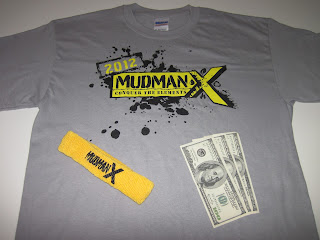