After the amazing rookie-of-the-year season that BattleFrog had in 2014, I couldn't think of any better way to kick off my own SIXTH year of obstacle course racing than to enlist as a "combatant" in the first of their very hyped-up 2015 events.  Being in south Florida in February to escape the endless winter back home wasn't such a bad idea either!

1. COURSE-  I tried to research the course in the weeks leading up to this race, and poured over YouTube videos of last year's Miami event at Oleta State Park, where Spartan has also held their Florida Super distance race in the past.  However, a new year brought BattleFrog to a new location at Amelia Earhart Park, farther inland from the beach but still with lots of water (only fresh ponds now, not the salty ocean). In fact, less than even 100 yards into this race, runners were faced with getting soaked on a crowded and furious swim just to mess with the legs and lungs. Lots more obstacle course followed obviously, including at least another 4 or 5 dips in the water, but those didn't feel as harsh considering Saturday was a total washout with non stop rain during the day.  Despite the downpour, the sandy trails didn't produce much mud like we saw in August's NJ BattleFrog, but did still make everything a bit more slippery to climb. And with mandatory obstacle completion required for the elite racers, it stepped up the pressure to succeed on them on the first try.  The obstacle that probably claimed the most casualties, elite and open alike, was the rope traverse (ie "Tyrolean") which was long and a thick rough twine to hang from or pull yourself across.  My scorched and scabbed abdomen is proof of that this week! The most grueling had to be the double jerry can (50# each?) farmer's carry that seemed to stretch for nearly a few hundred yards, with an under-barbed-wire drag included near midway through.  The rest of the obtacles were similar to what BF has brought before, with the best coming all in a flurry before the finish.  The decline and then incline monkey bars were again slippery and tested the last ounces of grip strength left, and then a half pipe run-up to a water slide on the other side was the best ending besides finally crossing the finish and collecting your medal. GRADE = A

2. FESTIVAL-  I'm always faced with the difficult task of grading the party scene when it's affected by bad weather.  In this case, we were talking about torrential Florida rain that just pretty much drenched every person, place, and thing nearby!  I actually felt really bad for all the vendor tents and merchandise that got nearly ruined by the sideways rain and flooded floor area.  Nevertheless, if considering this on a nice day, the festival would have been pretty good.  A big military presence, which goes with the theme of their event and founders, was impressive (even though I think they have abandoned the helicopter ride and drill demo's that we saw at some of their events last year). There were lots of samples and a wide variety of products on display, and the official BF merch tent seemed to be hopping with a huge new line of apparel and souvenirs, unless that was just from people staying out of the rain :-P   GRADE = B

3. SWAG-  You can't beat what this race series gives you in terms of their medals, with the 15k and 5k versions (I ran both) shown here, both super solid and heavy.  There is also an "Xtreme" medal and stars awarded for their endurance race of doing both distances and repeating numerous 5k laps within a certain time cutoff.  The orange individually numbered wristband (yellow for the ladies) is BattleFrog's new elite disqualification system.  Complete ALL the obstacles and keep your wristband (as well as be eligible for awards) or risk having it cut off and essentially no longer be in the elite class for that race.  I like the idea, since after all this is an obstacle race and not just about seeing who is the fastest runner.  Lastly, the shirt is an updated design and high quality cotton.  It's a minor thing, but for some reason that fact that it has green stitching on the collar and shoulder, as well as a small BF tag on the waist, says to me that they have really tried to make a special and unique product from what many other race companies consider just a standard giveaway.  GRADE = A 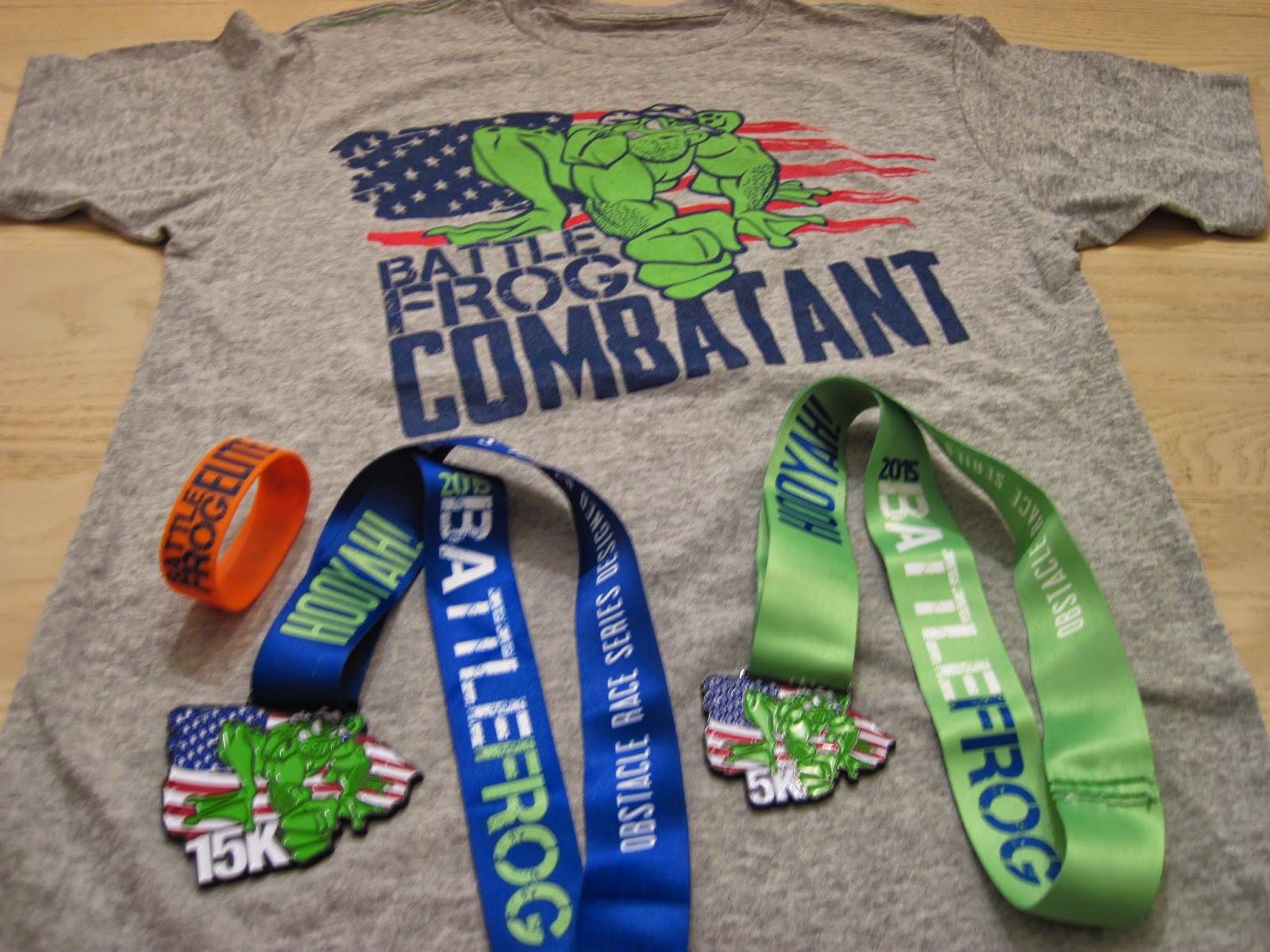