While I thought I might have a shot at still competing in my 2015 schedule's closest race to home, this injured ankle from two weeks earlier in the High Rock Challenge instead let me do this CitiField Spartan for fun among some friends and at an easier "rehab" pace. What it also did, as these stadium events have never been my favorite to race, was allow me to enjoy the experience a little more and soak up the moments of coursing through a major league ballpark, instead of the quick blur it would be in the elite heat.

1. COURSE-  Being a CrossFit enthusiast, I've not minded that each of the stadium races I've done so far (CitiField, Fenway, Tampa, and Philadelphia) all played well to having practiced those skills daily as many of the obstacles are really just fitness stations.  It becomes a little overkill though when there are stops to do jump rope, ball slams, pushups, box jumps, "ab-wheels", and of course those famous burpees all in the matter of a few mile race, especially for participants who were hoping for more of an obstacle field to navigate rather than going for a workout session. But I understand that space and permits likely place a lot of restrictions on what can "be done" at a multi-million dollar arena for pro sports teams, so I cut them some slack.  I was shocked to see the first Spartan in years not have their customary traverse (rock climbing) wall, though many were happy with that as their new extended zig-zag wall version has been a little tougher to complete. They have also toyed with many different styles of monkey bars at these stadium races, but when I went through in the post-rain afternoon, these monkey bars were closed down (for safety?).  A lot of other obstacles and equipment were wet and slippery too, and I wouldn't have been surprised if others would have been shut down also.  GRADE = C

2. FESTIVAL-  CitiField apparently just ignored last year's complaints about their party, as they chose to again send racers across the street to a local bar to redeem their "free" (aka included with entry) beer.  I knew about this from 2014, but I can't imagine how many first timers or out of town visitors had never heard of McFadden's pub and were completely lost on how to get their pint.  With total seating for somewhere around 45,000 in this stadium, I'd think they have enough room to accommodate all the participants and spectators who would have rather hung around in their borrowed box seats than crowd into a local Flushing NY watering hole. GRADE = C

3. SWAG-  Last year this race earned an "A" for their giveaway package, but I'm dumbfounded on exactly what happened this weekend.  First of all, as the picture below shows only some of the situation here... I couldnt even keep track of how many bracelets/attachments there were or what they were for, which Spartan wanted us all to wear!  We had one for the race heat entry, one for the beer (see Festival notes), a white and a yellow with Spartan name on them that no one knew what they did, plus the odd shoelace timing chip that seemed to cause issues and glitches all day.  Add in your bag check bracelet, and now you have more accessories than a 10 year old girl coming home from summer camp.  Seriously.  And for the first time ever at a Spartan, there was no bib, which is always a favorite souvenir among racers.  I know previously they had issues with either not including safety pins since they'd not want them littered around the stadium, and also another year they experimented with a sticker-back type that was a complete fail.  At least they continued to get the finisher medal right, going back to the same (smaller) style as all 2014 Spartans, but being unique to CitiField on the reverse side. Not surprised to see the same pile of gray standard (red Sprint version) shirts as we exited the course, but that's something we'll all have to deal with for the next 7 months I suppose.  GRADE = B 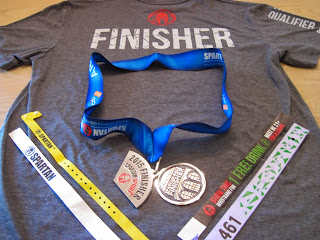