I was actually signed up to do this Winter Sprint last March but bailed after the weather reports predicted snow and single digit temperatures on that race day.  It was a little warmer this year, so I couldn't resist the novelty of actually running down slopes right next to downhill skiers!  In the Northeast, it hasn't been uncommon to do an early season event in April or even May, and still see some scattered unmelted spots of snow on the peaks of our race mountains.  On this particular weekend at Greek Peak, still fully operating in ski season, almost every inch of the 4 mile race was at least ankle deep in the white stuff.

1. COURSE-  The first race of the season for me, but also a first in a few other ways, as I kicked off my 9th career year in OCR.  This was the only time I have not run Spartan in the elite (earliest) heat and I had concerns about how the new Age Group system would work.  Being released later on caused many areas of congestion when catching up to slower racers that began ahead of us.  And also with only narrow single track of marching carved in the snow, passing became an extra effort to sprint in the knee deep powder on the trail sides. The snow also made for more challenging obstacles besides the actual trails, as either numb fingers or slippery holds seemed to send many more racers to the burpee zone.  This then of course also slowed things down and caused some backups at these obstacles too.  I had a tough time with (but did compete) the Atlas Carry, as the stones were caked with snow and made picking them up very hard.  The technical grip obstacles like monkey bars, rings traverse, and Olympus seemed to also claim a lot more victims with frozen hands (or gloves that probably made it even tougher to hold on).  And by the time I got to the Spear Throw, my fingers were so numb that my pathetic throw attempt sent me to join the band of other racers doing their penalty.  GRADE = B

2. FESTIVAL-  Off and on snow showers was a pretty and surreal atmosphere for a short while post-race, but eventually most needed to find shelter from the cold, which just wasn't well-provided.  It seemed most directions the race finishers went, they were being sent elsewhere.  The primary spots of retreat were either the base lodge restaurant (but had to sit and eat), the volunteer headquarters (restricted to only race day staff), or the registration room (which was overcrowded enough with the lines of people collecting their sign up packages).  So, the last option was to head to the car and start the drive home or back to the hotel.  I've done other races at ski resorts, and seen much better setups for those wanted to get inside, especially when its so cold out.  GRADE = C

3. SWAG-  Let's be honest- the main reason I even signed up for this event was for the commemorative souvenirs, which we expected to be as cool (no pun intended) as last year's snowflake Winter Sprint medal and special edition long sleeve shirt.   We did again get a long sleeve, but the design is no different than this year's typical black Sprint tee.  But the best prize was perhaps what I'd now call one of my favorite Spartan medals ever- similar to the new 2018 design but with powder blue coloring and a unique glass see through window insert that really make it a beautiful piece to admire.  GRADE = A 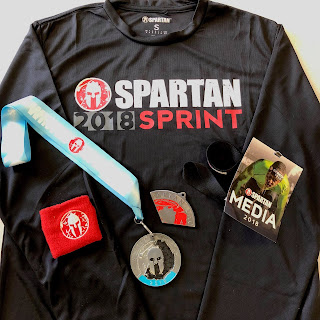