My first ever Tough Mudder in 2011 was here at Raceway Park in Englishtown NJ, a venue I've since visited a number of times for other OCRs that have rented out this site- including 2014 and 2015 BattleFrog, 2016 Terrain Race, and 2017 BoneFrog.  Every year since then I've only done one Mudder annually, in a different location each time, until they came to Long Island in 2015 and then I've made that my yearly (and convenient local) headband collection run. I did their Full, Half, and 5k versions (which they will be eliminating the middle one next year), but was disappointed in the shorter distances because of how few obstacles were used.  Seeing that the Full is really the most worthy event in my eyes, I went for the new ToughER version- a timed heat, the day's first wave of the Full distance course, with ALL the obstacles they'd bring.

1. COURSE-  Right after putting on my neon yellow crossing guard looking bib, I found out that this course would not be quite like the last one I did here at Raceway Park- instead of a true "Full" 10 mile course, they have gone to a double lap of the 5 mile Half recently.  However, thankfully lap 2 was not the exact path of the first, and also featured different (and better) obstacles the final lap. The Raceway Park venue is a mixed bag of different terrains- some single track forest running, some winding motocross mud hill tracks, and (unfortunately) also some unavoidable pavement, as they need to use that to connect areas of the park as well as utilize the namesake asphalt racecar track section.  The format of Tougher, besides being competitive and timed, included penalty runs for failed obstacles.  I was lucky to not face those this day, but they looked really minimal and painless (compared to that other big race series who fines in the amount of 30 burpees each time).  Among the best obstacles were my favorite Blockness Monster, and then Happy Ending, which both were only seen once. We were also given the task of "preparing" the Arctic Enema by carrying our own ice bag and then dumping it into the tub before taking that memorable dip.  GRADE = A

2. FESTIVAL-  Using a big field section, there was a true festival feel to the wide area and offerings.  Lots of vendors with samples (I like the Jack Links jerky and Kill Cliff drinks) , and also some fun games including a version of the ninja salmon ladder.  Main sponsor Merrell had a big tent with shoes to try on (no free samples there lol) as well.  GRADE = B

3. SWAG-  My biggest Mudder haul yet, since the Tougher race comes with this fashionable race jersey bib and different headband. And then building on Long Island's Repeat Offender pickups, this brought me to my third distance TM completed in the last two years, scoring yet another headband plus a mini kettlebell souvenir. The finisher shirt is same Merrell tech material they've had for a few years, so this was only the slightly different logo design from the other distance events.  GRADE = A 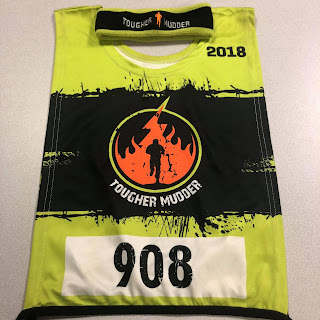 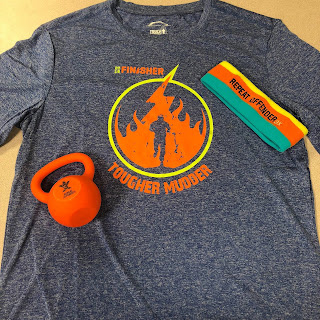