I couldn't have been more excited for the closest-EVER-to-my-backyard obstacle race when Spartan announced earlier this year at the Times Square event that they would be visiting Citi Field, home of baseball's NY Mets.  Having done last November's Fenway Time Trial in Boston, I know there wouldn't be much different to expect from this stadium run, but also now being under the era of Reebok I gave it an optimistic chance.  However, I can't say I or many people I talked to, were overwhelmed with the finished product.

1. COURSE-  Total disorganization at the start line set the mood for the entire day, as heats of 10-15 were released every minute or so.  People pushing and nearly arguing with each other to gain position before even starting the race, is just not the ideal way to kick off the event.  I know some even had to wait close to an hour past their assigned race time.   As for the course, I really hoped there would be more than a Fenway copy in NY, but for the most part it was.  A few new versions of obstacles, which could have been good but instead made a sour appearance, included the spinning monkey bars (which volunteers gave unclear directions for) and the peg handle traverse wall (which there weren't enough pegs available when I reached that station, having to wait).  As a spectator in the afternoon and in talking to friends in later heats, I learned that those types of problems were ALL throughout the 2.5 mile course- long lines to complete obstacles, having to wait for equipment (almost a 5 minute queue for a sandbag to carry or for an available rowing erg), and endless accounts of miscounting reps and non-enforcement of the burpee penalty for failing obstacles.  Spartan continuously claims they are reaching for the status of a professional sport and of course have money prizes for the elite wave, but with problems like these, there is a LONG way to go before they belong in that category.  Grade = C

2. FESTIVAL-  Just like Fenway... no such thing existed.  Yes, I'll admit it was enjoyable to sit (free) as a spectator for a while and soak up some rays at the "New Shea" (even though I am a diehard Yankees fan haha) while the other 12,000 racers got through the course.  But I guess I'm just used to the outdoor, mountain slope, backcountry venues where there's a band or DJ rocking out on stage, games and contests being played, and beer being consumed by the kegfull as everyone's well-deserved race unwind sets in.  I believe there was an advertised post-race party at some local bar, but that doesn't really cut it.  Grade = C

3. SWAG- I guess the one thing that saved this event from straight "C" marks, but just barely.  Again, comparing to the Fenway Sprint- really nice quality finisher medals, which were unique to the year and venue, gains major points at any race.  I had hoped the same would have been the case for the t-shirts, as everyone got a limited edition version in Boston, but today's was the same one I picked up in Miami a month ago, and probably will again at all the other SR's this year (Note: the photo below is a promo shirt from that Times Square demo in January, advertising the Citi Field event).  I also collected my first Jr Spartan Kids race medal, as I was lucky enough to "rabbit" the stampeding youth through the half mile version- at least there were no terrible lines or bottlenecks for their race!  One last thing to note, as it does technically fall under category of "swag"- for the first time ever the Spartan Race bibs were an adhesive sticker, and were an extremely poor choice.  Although the graphic design was attractive, there were countless lost numbers all over the stadium, course, bathrooms, etc as they just didn't work well.  If this was just an attempt to conserve for the world's safety pin shortage, I'll commend them.  Otherwise, I hope they will switch them back to the real ones ASAP!  Had to grab a personal souvenir as I had also done from the Red Sox- a ziploc full of the Mets' finest "mud" ;)  Grade = B 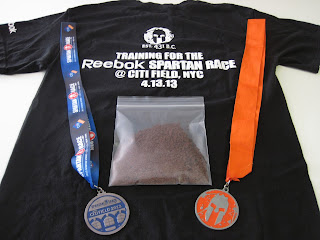