I won't make you suffer again through the long, sentimental intro I gave in 2014's Tuxedo Report (hint: go back and read it!), but longstoryshort, this is probably the Spartan Race I look forward to the most every year.  It came from a humble beginning four seasons ago to now being the biggest event they put on all year (4 race days over two weekends), helped on of course by its relatively close proximity to the dense NY/NJ legion of Spartan's out here.

1.  COURSE-  Each year Tuxedo Ridge surprises us with slightly more difficulty and distance, leaving finishers fooled by how they were somehow slower than the year before (usually).  Of course as I'd tell anyone you can never truly compare any OCR time to another besides only maybe that same exact day, and even that can change with weather or course modifications.  But I digress, this year the Sprint was a hair under 5 miles, so most returnees saw an extra 15-30 minutes on top of their 2014 race. There was plenty of uphill work as there always is here, with the worse being their famous barbed wire crawl (two, actually) and a very long sandbag carry, which apparently was shortened a bit on Sunday.  So again, most chip times were pretty different if you ran back-to-back days.  A few of the strength obstacles were gone, such as the tire flip and the atlas stone carry with burpees, though neither have been much of a game changer. I'm not sure if the traditional monkey bars are gone for good, but the newer Multi-Bar rig has become a regular sighting- an American Ninja Warrior style traverse, with 4 swinging knotted ropes between two horizontal hanging metal poles.  That obstacle seemed to be the biggest cause of penalty burpees, especially Sunday when there was more wet mud to limit grip.  GRADE = A

2.  FESTIVAL-  It's been a pretty consistent setup every time but as I mentioned last year, the growing crowd has forced some of the party to now move partly up the hill from just the base lodge patio.  The hot spot is the beer garden next to the epic barbed wire crawl, where there was also the debut of the Spartan Rig demo, an SR branded monkey bar set up with ropes and other climbing attachments to play on.  Perhaps we will face that in an actual race soon, as we have already seen Platinum Rig before in Ottawa, Vermont, and possibly some other locations.  I kind of like that the festival now has a few spread out areas, so you can spend some time in each and still get a good view of some key sections of the race.  The only spot I'm not a fan of (for spectators) is the start line, which is about a 100 yards or so down a dirt road, in a secluded corner of the mountain.  GRADE = A

3.  SWAG-  No different that any of the takeaways from the few other Sprints I've been to so far this year, like Charlotte or Citifield Stadium. But I was really hoping the race bib controversy was a fluke and we'd get those treasured numbered souvenirs back. No dice, as the registration envelope (shown below) again now serves as that memento, and likely is how that will be from now on.  Warning- if you want to keep that for a wall decoration, do NOT wear it during the race as it isn't waterproof and will become just a soggy shredded piece of paper by the end.  As for medal and shirt, you know the deal... same old, same old.  GRADE = B 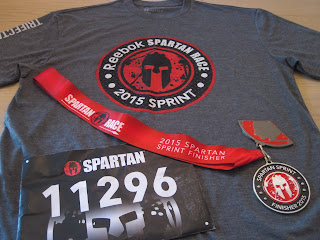