A year ago, my initial regret of missing the very first Beast course here at Mountain Creek vanished as quickly as the hype that built up for it. For one, the cash I took home instead for winning the absolutely awesome ABF Mud Run that day helped my personal guilt ;) But mainly, all the discussion of that Beast being a letdown and no other news besides there still being some ski season snow left on the trails (for one barbed wire crawl section, whoop-dee-doo!), didn't make me second guess my race choice back in 2015. BUT... in comes Stormin' Norm Koch, his den of black bear pals, and (for Sunday) a lovely weather forecast of pouring rain and 50 degree temps...and now we can possibly compare this to the annual VT Beast hellride!  Quite a way to celebrate (?) my 100th career OCR hahaha...

1. COURSE-  I've only been to this venue for their NJ Super the last 4 Septembers, so the different season did offer a new feel for Vernon NJ. I guess a warmer Spring didn't leave any of the snow available for Spartan to make us crawl through this time, but make no mistake it was still there just in the form of very sloppy wet (and extremely slippery) trails, which this course seemed to find every damn inch of to "run" in. I might have to say this was the single muddiest race I've EVER done, but that's obviously considering it also was a full 15 miles worth if it, and all courtesy of Mother Nature.  The water sections I would have dreaded most were surprisingly not as awful as the "Ball Shrinker" name they gave the waist-deep lake traverse.  I cant quite give this race the same evil factor as Killington when the heavy carries (log, bucket, and only a single sandbag!?) were just slightly less sadistic here than in VT.  Really nothing else new besides a silly sewer drain pipe to jump and roll over, and an option for a ladder style Tyrolean Traverse, which appeared few people wanted to try since it would be slower.  Either way, you got every penny worth of the signup (double that for 2 lap UltraBeast'ers) plus lots of aches and pains to follow as good souvenirs this week. GRADE = A

2. FESTIVAL-  Most of the action was shut down on Sunday due to the weather, but I've always liked the layout at Mountain Creek.  Spectators at the "base" area got to see racers hit at least 4 legit obstacles- the popular Multi-Rig and Rope Climb mid race, and the Herc Hoist and A-frame cargo right at the finish.  Being another 4-5 miles longer than the Super thats held here, it's tough to squeeze in more obstacle viewing, but they got most of the exciting ones covered for the fans at least.  I do think that the Spear Throw (while I hate it as an "obstacle"), should always be right there for spectators to watch, but here it was about 2 miles uphill before the end. GRADE = B

3. SWAG-  The new logo cut-out finisher medals are pretty awesome, and being well received after a redesigned 2015 medal was a nice change to the several years of almost identical versions before that.   The included Trifecta pie piece looks to be the same as what we had last year- actually I'm curious if it "fits" with previously earned pieces to make a multi-year completed puzzle?  I was also happy that I grabbed my green shirt so early in the year, as it might be my only Beast for 2016, but that remains to be seen...  GRADE = A 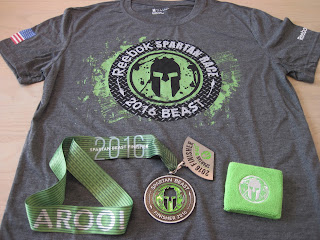 Quick note: as you might have noticed a few weeks ago from the CitiField Stadium Spartan Race, this year I will only be doing a full race review for events that are new for me, which I have not done before in past years. I will however still post a "swag" pic for every race, and continue to do gear/equipment review articles.  And you can always use the Search feature to look up other races or topics you want to read up on.  Happy 2016 OCR season, and thanks as always for checking out my site!