While most of the weekend's attention was on the inaugural New Jersey "Snow" Beast where Spartan Race has held their Mountain Creek Super course each September, about 2 hours south on I-95 was this race which I have wanted to do for years but just hadn't been able to.  Set on Miller Farms' 55 acre horse ranch and built out as a permanent obstacle course for training weekend bootcamps and hosting this annual race (their other in is Medford NJ in early October), Above and Beyond Fitness or "ABF" put on nothing short of an event that went exactly as their name describes.  I also want to note that this particular event, using the online hashtag #CANCERSUCKS, was an effort to raise money for families fighting the disease and a special dedication to those that had recently been lost to it.

1. COURSE:  I'm not sure that just giving an "A" truly does this course justice, as this exceeded all of my own expectations and what I read from other reviews.  What I knew going into this was that it was obstacle dense and despite only about 4 miles in length, to not expect a fast finish time due to the tasks (and penalties?) we'd find on course. As if just having over 50 permanent, fixed obstacles wasn't enough to excite anyone, the variety and difficulty of these challenges really put a smile on my face.  I consider myself more of an obstacle guy than a real running speedster, so the fact that two obstacles humbled me was a great takeaway knowing this race was legit and not just inflating their obstacle stats to make their course sound more impressive.  Many other obstacles gave a tough test of grip such as the two monkey bar rigs with various hanging attachments that left a number of people with some blisters at best, or at worst another failed obstacle penalty in ABF's "Quarter Deck".  This feature, rather than Spartan Race's mundane burpees or BattleFrog's manmakers, was a time consuming and grueling difference maker in the race as participants had to drag a tire the length of a football field and then separately carry two sandbags also to that point, only to drag the entire load back to the starting area.  I was lucky to only have to do that penalty twice, after their 16 foot high ninja warrior Warped Wall (which was actually the first time I've ever attempted one like it) and at the deceptively tricky inverted wall climb named the "Destroyer." Throw in at least 4 very cold water crossings, the longest rope traverse (aka Tyrolean) I've ever done, and about another four dozen obstacles, and you get one of the most impressive OCR courses you can find!  GRADE = A

2. FESTIVAL:  Any time you're competing for numbers on the same day with Spartan Race, let alone a new event in the same state that was much hyped for its intense difficulty and the fact that snow was still on their ski trails in Vernon NJ (whether that's appealing, or not!), it's tough to draw thousands to any other race near it.  For me, the fact that the Spartan's mens elite heat apparently became full was a blessing in disguise to decide to instead finally come out for ABF.  Despite a small crowd, and maybe smaller than it would have been without the Beast grabbing most of the tri-state area's racers, the "local OCR" feel was such a refreshing experience that I haven't had since last year doing several MudmanX events.  It was immediately obvious that Chad Mason and his staff, including every volunteer, took incredible pride in the entire production of what went on.  Attention to detail and the satisfaction of every "customer" (whether racing or spectating) was an unmatched effort that I think you will ever find at the big name events. I'll trade volunteers who enthusiastically cheered us the entire course and a personal handshake and congratulations from the owner, over being just another bib number and timing chip to go through the line ANY day!  GRADE = A

3. SWAG:  This was the aspect of ABF that took me most by surprise, but maybe it really shouldn't have.  It's funny how sometimes there is this irony of the smaller events coming out with the best giveaways, which reminded me a little bit here of last year's BoneFrog Challenge and their swag.  Just like I mentioned above with Chads's dedication to quality, the post race souvenirs were top notch.  I'll have to measure by size and weight, but their finisher medal is one of the biggest and heaviest in my collection.  And it's intricate mud splash design is something so artistic it just might make my other medals jealous!  We also received a logo'd ruck patch and a shirt which on the back has the date and location (which I love, as you know).  The front has their motto, which applied as much to the race as it does to their cancer-fighting charitable efforts, reading "Be strong when you are weak, brave when you are scared, and humble when you are victorious." After also being lucky enough yesterday to come in first place overall (and then win their age group cash prize too), I will remember this slogan and continue to try to always do as the shirt suggests.  GRADE = A 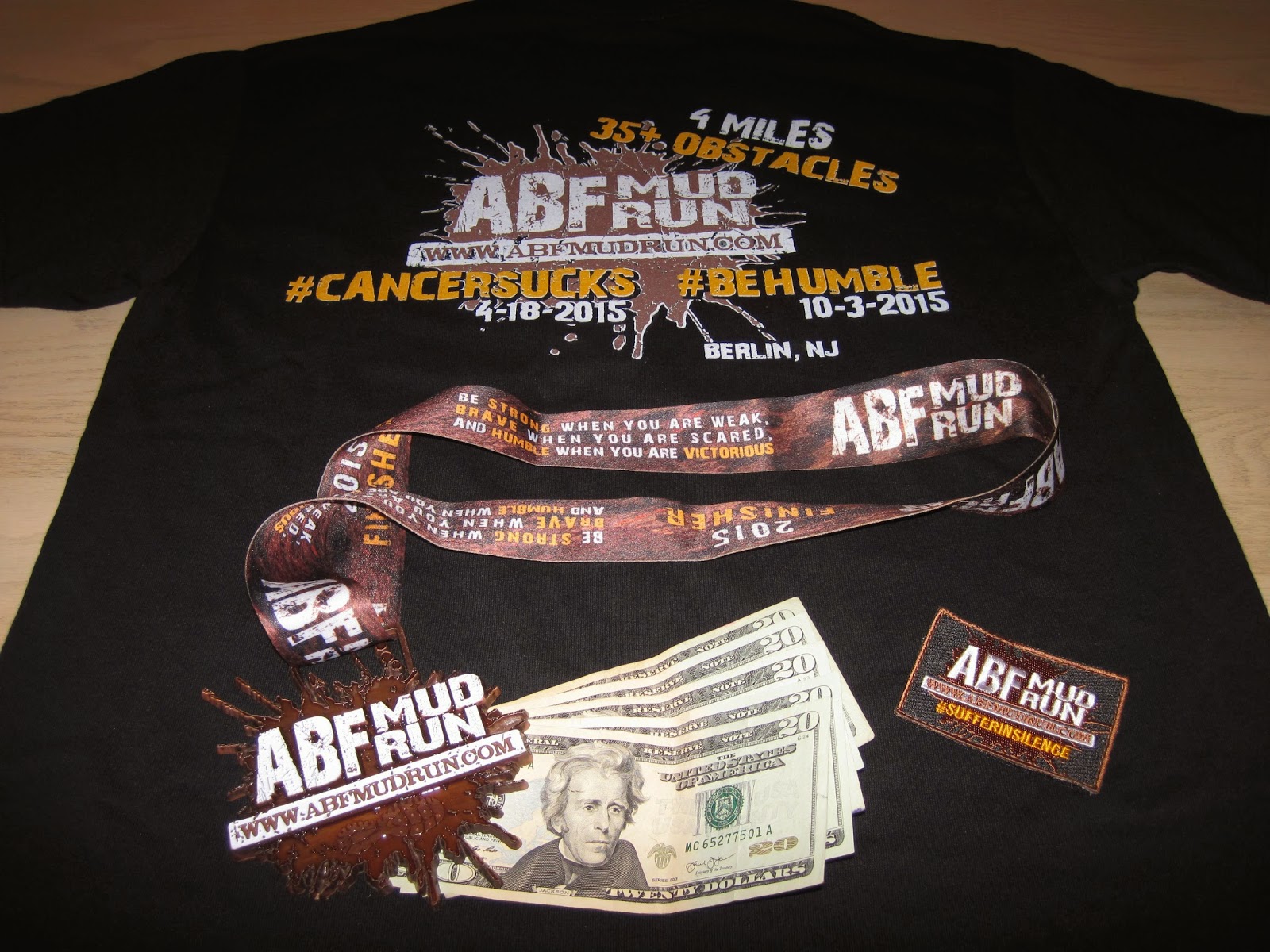