Almost a year ago to the day, I declared I had just finished probably my final Spartan Beast course ever, here at Mountain Creek NJ.  That race was just plain miserable- a 15 mile, Norm Koch designed course of brutality through pouring rain in 40 degree temps.  No part of that was fun to me, and 4 hours of it was enough to announce my (long course) retirement.  But like an aging Jordan or Favre, I got sucked right back onto the field, this time my first Spartan as a Master's division athlete.

1. COURSE-  A lot of times I have trouble recalling much detail after an OCR course, especially one that's a half marathon length (this year, minus Norm's wizardry, was actually a noticeable 2 miles shorter than 2016's edition).  Don't worry, the "death march" (or a few of them depending on which you give the name to) still had plenty of influence on this mountain's racers legs.  But most will probably recall instead the treacherous downhills (at least my quads did all week after), which were super rocky, technical, and slick, especially with the overnight rain.  Two new obstacles made their appearance in the northeast- the Bender inverted monkey bars, which didnt give too many that much trouble... and the Twister spinning handle pole traverse, which certainly did!  However, what most were griping about at the end was probably the nasty Bucket Brigade that preceded that, heading into the final few hundred yards of the race.  I know everyone got a kick out of the one patch of snow a few miles in, but probably weren't too excited for the waist deep chilly pond crossing.  Either way, with or without our old pal Norm, you get your money's worth out of this Beast.  And... maybe I'll be back next year. GRADE = A

2. FESTIVAL-  Spectators got a great view of those last few obstacles, plus the Rope Climb, as they watched their friends grip strength deplete over the last 5 minutes of an all day affair.  Not much else was different in the setup from last years race or the Super that has been held here every Fall since 2012.  Still one of the best arrangements that Spartan has put together for a great finish line view, but keeping it from a slighly better score was the fact that they did not run the ski gondolas to allow fans access to the upper sections.  GRADE = B

3. SWAG-  Another perk of running this early season Beast was getting to be among the first to pick up their newly redesigned medal, vastly different than most years in the past, and of course the 2017 green shirt (reverse shown in pic).  But even with all this new swag, I'm still a little partial to another souvenir I picked up at the awards ceremony- the first time I've been on Spartan's podium since the early days of helmet and sword trophies in 2011.  GRADE = A 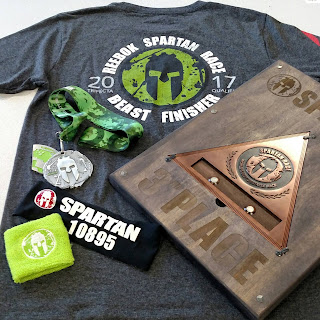