Though a bit of a trip from Long Island, this was the second stop of the 2019 Stadion Series after doing the CitiField Spartan a month earlier.  Since focusing my training mainly on the short, intense style stadium races the last few years, and this also being a "new" event for me (though they all are generally similar), I decided to pack up the fam and make a long weekend out of the 5 hour drive to the Nation's capital, where I hadn't visited in decades anyway.

1. COURSE-   As I said, not much differs in a stadium race other than the city you find yourself in that particular Saturday, and it seems that these races are actually becoming shorter (or we're all just running faster?), because even top finish times are now commonly under a half hour, so it's almost over before you're even getting into any groove.  And to speed things up even more, the obstacle penalty the last couple years has been reduced from 30 to 15 burpees for each fail, so that might not set you back too far in your race.  The typical (baseball) stadium takes you running through most sections of stairs stairs and more stairs, but the payoff is always the bonus access to the locker rooms, dugouts, and finish line tour around the outfield dirt warning track area.  And if you don't look up once in a while, you'll miss the pretty incredible views from the far corners of these stadiums, to really appreciate the size of the arena you're conquering.  GRADE = B

2. FESTIVAL-  No stadium has really done this well, due to space limitations inside the parks, but DC did have a pretty wide open walk through entrance/exit space where vendors had rows of tents set up.  Still, overcrowding as the morning went on from spectators and racers going to/from the course made it a little jammed up to move around and navigate easily where this was.  The best of festival setups by far has always been the Boston Fenway Park race, using their adjacent Yawkey Way street block to greet the day's customers.  GRADE = C

3. SWAG-  A pleasant surprise was actually getting a different medal than April's CitiField race, because this DC event doubled as an Honor series race, so the finisher medal was for that, and accompanying pie piece was the yellow Stadion part.  The shirt was the same as the other stadiums we'll get all year, which I do particularly like- since they happen to also be the same colors as my gym, Obstacle Athletics ;)  GRADE = B 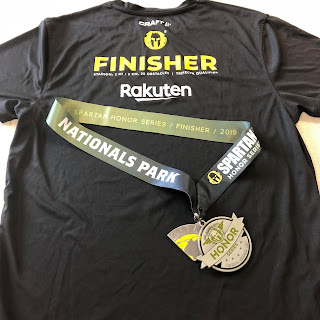