With all the drama this year surrounding Tough Mudder's corporate struggles and event prize changes, I was so glad that my prayers were answered for this event to still happen!  Now, for anyone that knows my dislike for ultra endurance type races (or training), you'd be surprised to know this was perhaps the event I was most looking forward to all year.  Definitely out of my few-hour running window comfort zone, my pal Keith convinced me to take on this crazy overnight race for maximum course mileage when we began winter training in December (usually in the dark through cold and often rainy, snowy conditions) to not make a fool of myself come Toughest time six months later!

1. COURSE-  And here we are in May, in that sort of unsettled Spring time weather (which was my biggest fear of cold and the idea of possibly using a wetsuit to race in), but feeling ready to finally do this thing from sundown to sunrise.  I've only done one other night OCR race back in 2012 at the short Ultimate Mud Run, which was a sh*tty 5k event but still interesting being in the dark.  This time, headlights required since all but the obstacle were lit up, so running between them was too dark to see without one.  Luckily, the weather was ideal and wetsuits really weren't needed.  I did get cold around 8 or 9 hours into it (around 4am), but the constant moving easy pace kept me warm enough until then.  The format of the event was also unique, as each 5 mile lap was completed you had the opportunity to pit stop at your campsite tent setup to rest or refuel.  The first lap was also a gift since obstacles didnt open until at least a half hour from the start, with more opening every 30 minutes after, so we got to avoid the un-fun Arctic Enema, Electroshock Therapy, and many others until even into our third lap.  The best and probably more challenging obstacles were the Gauntlet, Funky Monkey, and Mudderhorn, which were longer and more physical.  And a nice announced surprise was a wristband awarded for lap 4 and beyond completed, which gave you an obstacle bypass for ones like those just mentioned, that might take too much time or grip strength to complete, as there were also small penalty run loops for failing (in addition to maybe falling in the cold water first!).   GRADE = A

2. FESTIVAL-  As we arrived in the evening, most of us didn't get to really experience the actual festival area which was closing down from the day time full Tough Mudder event that took place, so in lieu of that, we'll consider the "Pit"... which was maybe the coolest aspect of the entire event!  All racers were given a 10x10 foot space akin to a camp site registration, to set up as they like for a comfort and transitional area between laps.  The end of each 5 mile course actually went right through the Pit, which was a much-looked-forward to section, as the support crew of friends cheered every racer passing through, giving new life to tired legs each time around.   And luckily, Arctic Enema ice dumpster was one of the last obstacles of the loop, so you had just a quarter mile before being able to dry off and warm up at your Pit after.  GRADE = A

3. SWAG-  Like any of the TM competitive events such as when I did last fall's Tougher Mudder NJ, my favorite souvenir is the super cool race bib that is yours to keep after.  We also grabbed our finisher shirts prior to the race, since they feared running out by morning time.  After the event formally concluded at the 8am finish line cutoff time, it was time to line up and collect your hard earned swag at the hospitality tent.  Those items started with the first time ever Tough Mudder medal, yes I said MEDAL, for (I suppose) at least completing one lap of the course.  The same achievement also got you the commemorative black/blue Toughest headband.  The final collectible was a patch for the number of miles completed through the 12 hour event, in 5 mile increments, which I proudly took for reaching my goal of officially becoming an ultramarathoner here with 6 laps and 30 total miles done, almost twice the distance I've ever run in a single event in my life!  GRADE = A 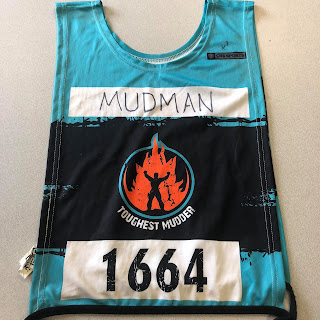 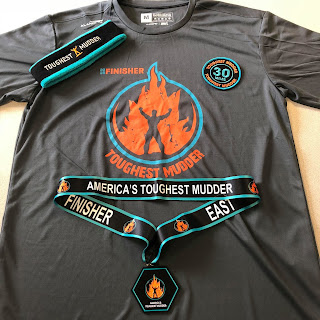