This was the fifth year in a row Spartan has taken over the Mets' home while the team was on a road trip, and not much has really ever changed much. The major addition to this years event, reminiscent of 2015, was the all-day downpour that made feet wet, grip slippery, and of course part of the fun taken away with a "dampened" mood (pun intended).  But regardless, the show went on despite many fearing the weather might possibly threaten otherwise.

1. COURSE-  Estimates clocked this course right around 3 miles or maybe slightly under, which had to be shorter than the year before.  I looked back and saw my time this year was even a solid 10 minutes faster than 2016. Besides hitting my spear throw this year on their newly designed target (missed it last year ugh), another reason for the quicker finish was not having the brutal stairs water jug carry that had crippled most of our legs.  The usual fitness stations were all there (ball slams, jump ropes, pushups, and box jumps), but the rep numbers varied anywhere between 20 and 30 for each instead of all being the same, and that was confusing to many.  Always glad to reach the finish line, the exit was almost as tricky of a course to finally go change into some dry clothes.  GRADE = B

2. FESTIVAL-  As mentioned, the lousy weather kept the festival from being anything like a ballpark tailgate.  At stadiums, the field level seating is the preferred place to spectate or rest after your race, but the soaked, otherwise-expensive, box seats were left empty.  First base side hallway was the main gathering area, but crowded hallways to avoid the rain weren't too much fun after a while.  GRADE = B

3. SWAG-  My first of many 2017 Sprint shirts I'll add to the collection, but many racers including myself had no idea where to even pick them up since they weren't distributed at the finish line chute like usual. Instead you had one more obstacle to traverse, the deep puddles of the parking lot, to get your tshirt at a tent outside the stadium.  I have to say I'm a little disappointed in the medals, which look exactly the same as all of last years' stadium races, and the ribbons for CitiField are just plain ugly compared to the Mets blue/orange theme colors every other year.  Of course, I got over that little let-down by picking up some better souvenirs with my second Spartan elite podium plaque in a row AND a Spartan World Championship qualifying coin here!  GRADE = B 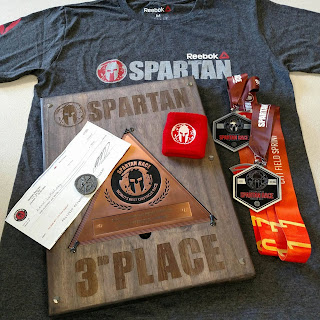